About a year ago, I received uncertain medical news about a loved one. I remember feeling the weight of it. The ache in my heart. I went into the bathroom at work and prayed. As I sat there on the cold tile floor, I felt unable to continue. Unable to muster up the strength to face another medical crisis.

I hate it, but sometimes…this is life. Jesus promised we would face troubles of many kinds. We can’t tell life, “Thanks, but I’m done now.”

But we can tell Jesus, “This is where I stop, and you begin.”

My husband encouraged me that day by texting me Romans 12:12 which says, “Rejoice in our confident hope. Be patient in trouble, and keep on praying.”

So I whispered to the tile walls, God is not done. He is my refuge. I can trust his timing and his decisions.

The unease didn’t leave me, but this reminder gave me something to cling to. It was an anchor to remind me who God is and what he is capable of.

Sometimes the most helpful reminder is to acknowledge that He is our refuge. In crisis, may you find your strength by turning into the embrace of Jesus.

Those who live in the shelter of the Most High will find rest in the shadow of the Almighty. This I declare about the Lord: He alone is my refuge, my place of safety; he is my God, and I trust him.
Psalm 91:1-2 NLT

The Lord is watching over me – over every step I take. He hears every thought and feels every breath. Why is it that I cannot always hear his whisper?

Those who know your name trust in you, for you, O Lord, do not abandon those who search for you. Psalm 9:10 NLT.

There is nothing like your presence, Lord. Nothing can compare to it. For it floods into every corner of my heart, filling my whole body with peace. Giving me security. And showing me contentment. It awakens my mind to believe that anything is possible, because your power is limitless.

Direct my steps, Lord Jesus. Teach me your ways. Help me learn how to put my faith in you, and not in how I am feeling. Your truth shines light in the darkness. Train me, O God, so that my confidence is in you.

I would have lost heart, unless I had believed that I would see the goodness of the Lord in the land of the living. Psalm 27:13

My precious husband and I are celebrating 40 years of marriage this month. I honestly didn’t think we’d make it to 40 years – its been a very frightening year but we’ve also experienced the grace, mercy, and closeness of our Lord in so many ways.

In January, my husband fell ill and was experiencing horrible physical symptoms: He lost 40 pounds in just a matter of weeks, had severe jaw, neck and shoulder pain, a constant fever that ranged from 99 to 103 degrees, drenching night sweats, sore eye sockets, periods of uncontrollable shaking, bruising on his palms and legs, weakness, exhaustion and difficulty breathing. As he would rock back and forth in pain sitting on the edge of the bed I would sit next to him and gently run my hand over his back and pray, finding it hard to breathe myself because I was so terrified. The only whisper of a prayer that I could get out was, “I trust You, I trust You.” It took weeks of blood draws, scans, x-rays and biopsies to finally come up with a diagnosis. He had Large B cell Non-Hodgkin’s lymphoma.

During this time we would encourage each other the best way we knew how, reminding each other of the goodness and trustworthiness of the Lord. Through our mustard seed-like faith, He grabbed hold of our hands and walked us down a path of amazing blessings. I started making a list of the surprise gifts from the Lord that grew to a couple of pages which gave us an expectancy of how He would “show up” each day. Out of the many different kinds of this type of cancer he was diagnosed with the one that is not only treatable but curable and had very little to no side effects from chemotherapy. In addition to having enough money stashed away to get us through the eight months he was out of work, people randomly handed us money – we even found a $100 bill lying in our back yard partially covered with leaves. The other financial miracles left us awe struck. We had the awesome love, support and help from our daughters and their husbands, many prayers, the tireless help from my sister-in-law who has uncanny medical knowledge and came to every doctor appointment with us. God used the many kind words, gifts and gestures from so many people to remind us He was moving, working, and fighting our battles.

After making it to full remission in May and being back to work just a few short weeks he had a major heart attack while on the job. He drives semi and thankfully was at his first stop when it happened. He was airlifted to St. Mary’s hospital in Rochester where, through an angiogram, it was discovered that the widow maker artery was totally blocked and two stents were put in. If it wasn’t for the quick action of an employee calling 911 and the first responders that were readily available, he wouldn’t be here today. God was still showing us His faithfulness.

The Lord chose to give divine wisdom and insight to the medical professionals in both cases to save his life. For those of you who are going though a similar situation, let me encourage you not to lose hope and to trust fully in the Lord. We don’t know what the coming year will hold, but we have come to understand on a deeper level just how good God is. He is faithful, He cares, He knows, and He’s concerned about every little detail of our lives. My husband’s latest scan still shows no cancer and the oncologist doesn’t expect it to return. He’s back to work and is continually gaining back much of his strength. Praise! 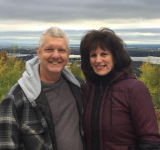 Kathy lives near Minneapolis, Minnesota with her Super Hero husband, Joel. She has two adult daughters and two over-the-top smart grand children. She divides her time between painting, gardening, and the joy of taking care of her home and family.